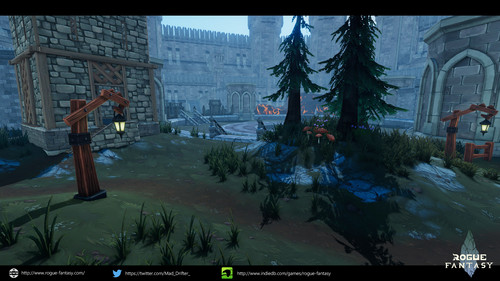 Well, after a long wait, we finally have a demo for Rogue Fantasy! In this devlog we'll go over what's been done, and general plans on how we'll be taking the future of the game to completion.

We needed a place where we could quickly test out combat in a lot of different scenarios, and well, the arena was born. It's a completely static map unlike the rest of the game, and makes use of the Terrain component. This was an important area to test out, as we weren't sure as to how the pathfinding would generate.

For the most part, it was a success, but we did come across a crucial issue: meshes that were on top of the terrain would have a valid pathfinding mesh on them but above as well. When enemies decided to wander around, they weren't very considerate of the height that they were traversing, and most of the time, they'd just collapse to the pathfinding mesh below. By spending some time tweaking the pathfinding parameters, we managed to solve most cases.

example of how pathfinding generates on stairs

After the pathfinding was sorted out, the next step was taking care of the Sky Dome. A static instance manager was created solely for the arena that controlled how fast time flew by, so nights were longer than days by quite a large margin. It also ended up controlling spawns for meteors that would spawn enemies automatically in waves to test performance.

With all that, the basic environment was done for the Arena.

Another AI rehaul was done,  this time making the behaviours from modular blocks of code. After creating game specific actions, a reusable behaviour tree was designed to take care of basic wander + search as well as attack behaviour.

Here's an example attack pattern that makes use of the referenced tree.

In addition to the new behaviours, we started to work on offloading the attacks an enemy could make based on its weapon. Since enemies of a specific type share the same animation controller, we also moved all the animations into one so that in the future, when an enemy picks up a weapon, they'll do the attacks for that weapon.

After some suffering, we managed to get ragdolls to work for the most part. However, they are only enabled for humanoids at the moment.

We compiled shader variants and set shaders to be preloaded and fixed more audio import settings. All the AI routines are loaded onto a main manager that decides what level of complexity that the AI should be running at, as well as hiding/disabling visuals.

Plans for the future

There's a lot to do for sure before we complete the game. Currently, we're working on the hub that you'll start in at the very start of the game, serving as a main area before heading into a dungeon. After the hub is complete with a shop and skill implementation, we'll be focusing our efforts into creating numerous dungeon rooms with puzzles that'll be a lot more difficult. This'll also come with extra tools to help traverse the dungeon and combat enemies. Eventually, we'll be looking into getting a custom soundtrack done and purchasing some SFX for the environmental interactions and enemies.

As for devlogs, the future ones will feature stuff we're currently working on as well as possible patch notes per version. We'll try to release a new version every month.

That's all for this devlog! There's a free demo available if you want to get a preview of the combat as well as an example dungeon that's semi-procedurally generated. If you have any feedback or comments, feel free to leave them below. Thanks!

A rogue-like action adventure inspired by Legend of Zelda. Free until near release.